The Rhode Island Red is an American breed of chicken. It is a utility bird, raised for both meat and eggs, and also as a show bird. It is a popular choice for backyard flocks because of its egg laying abilities and hardiness. All brown egg laying hybrid chickens are based on the Rhode Island Red.

Rhode Island Reds were developed in Rhode Island and Massachusetts, early flocks often had both single and rose combed individuals. It was from the Malay that the Rhode Island Red got its deep colour and strong constitution.

The Rhode Island Red were originally bred in Adamsville, a village which is part of Little Compton, Rhode Island. One of the foundation sires of the breed was a black-breasted red Malay cock which was imported from England by a sailor. This cock is on display at the Smithsonian Institution as the father of the Rhode Island Red breed.

The bird's feathers are rust-colored, however darker shades are known, including maroon bordering on black. Rhode Island Reds have red-orange eyes, reddish-brown beaks, and yellow feet and legs, often with a bit of reddish hue on the toes and sides of the shanks. Chicks are a light red to tan color. The roosters usually weigh in at about 8.5 pounds (3.9 kg), the hens average slightly less at 6.5 pounds (2.9 kg).

Rhode Islands can be aggressive especially when kept in small spaces although they generally do very well with humans. they appreciate space to run around.

Rhode Island Reds are good layers of brown eggs. Hens lay 5–7 eggs per week. The hens lay approximately 310 eggs in their first laying season and 220 in the second. 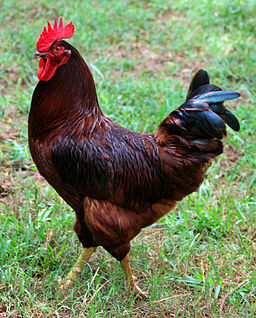 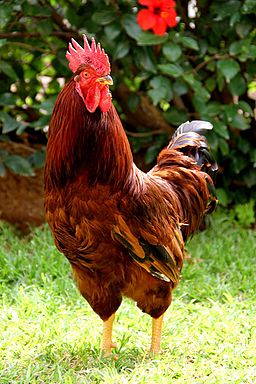 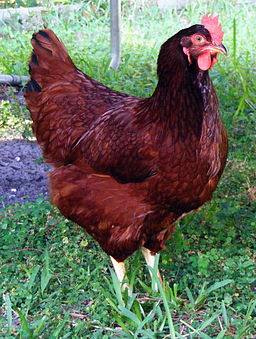 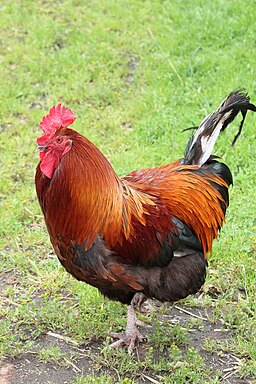